Overlooking the calm blue waters of the Adriatic, Dubrovnik is one of the world’s most magnificent walled cities. Now a UNESCO world heritage site and Croatia’s most popular destination, it was once the capital of the maritime republic, The Republic of Ragusa (1358-1808).
The city walls, mostly a double line, have been a source of pride for Dubrovnik since the 16th century. Along its course and within its walls lie several towers and fortresses, as well as numerous historic monuments. And beyond the walls, many villas surrounded by pretty gardens. The Stradun, or main street features beautiful late-Renaissance houses on each side. Except for the Stradun, the old city is a maze of picturesque, steep, narrow streets that twist and turn. 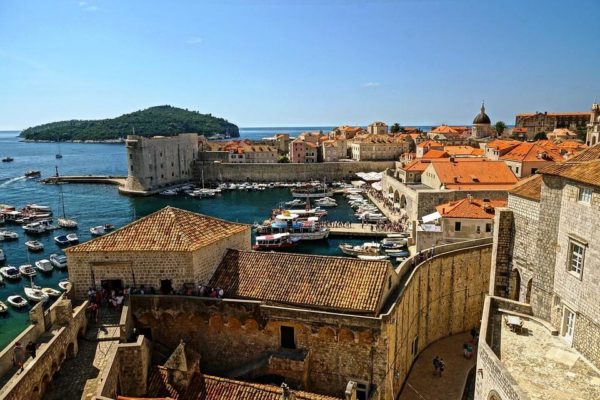 It is Croatia’s greenest island with its Mediterranean vegetation, clear and clean sea, gentle sandy shoreline and a wealth of underwater sea life. The island is considered to be one of the most beautiful of the Croatian islands. Half Mljet island is a pristine national park. There are few residents, no large towns and only one major road. Mljet is well known for its white and red wine, olives and goat cheese. It is indeed a unspoilt island covered by a dense Mediterranean forest. The sea is rich in fish and marine life. 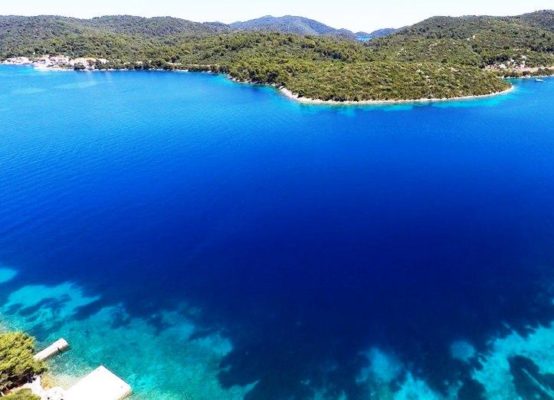 Korcula is best known as the birthplace of Marco Polo. The island is a little further away to get to so you have fewer crowds and can enjoy the island more! So lush with dark pine forests, vineyards and olive groves the ancient Greek settlers called it Korkyra Melaina (‘Black Corfu’), Korcula has managed to avoid the tourist trap tendencies of its original Greek namesake to the south.
Korcula town itself is a walled medieval town rising straight up out of the clear blue waters of the Adriatic, with a herringbone pattern of narrow streets and alleys. Korcula produces some good wines, in particular “Grk” and “Posip”, and one of Croatia’s best red wine producing areas, dingac, lies on the nearby Peljesac peninsula. 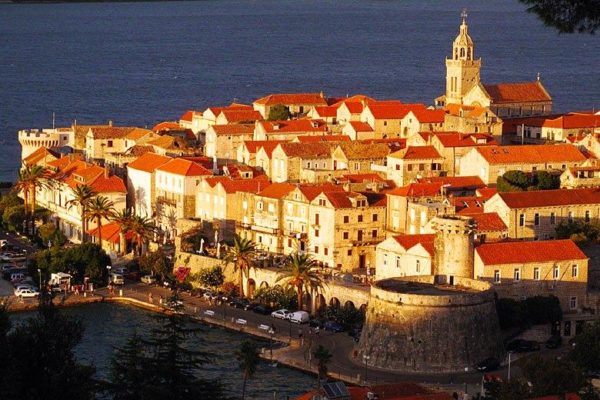 The island of Vis is a pearl among Croatian Adriatic islands, left untouched by the development of tourism for so many years. Vis has always been an island of fishermen and winegrowers. Komiza on the island of Vis is considered the cradle of fishing in the Adriatic, and in times gone by, the Komiza fishermen where well known in all Mediterranean harbours as experts in their field. 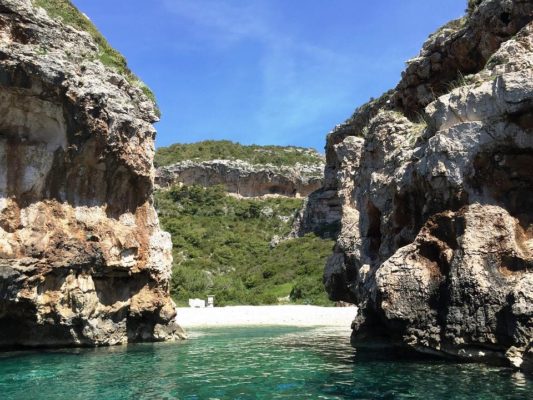 Hvar, a Croatian island in the Adriatic Sea, is best known as a summer resort. Highlights of the port town Hvar include its 13th-century walls, a hilltop fortress and a main square anchored by the Renaissance-era Hvar Cathedral. The island also features beaches such as Dubovica and inland lavender fields. Boat excursions serve the nearby Pakleni Islands, which have secluded beaches and coves. Hvar Island is known for its excellent climate. It enjoys no fewer than 2,800+ hours of sunshine each year. With warm summers and mild winters, rich culture, beautiful views overlooking the Adriatic Sea, it’s no wonder that Hvar Island attracts so many visitors. 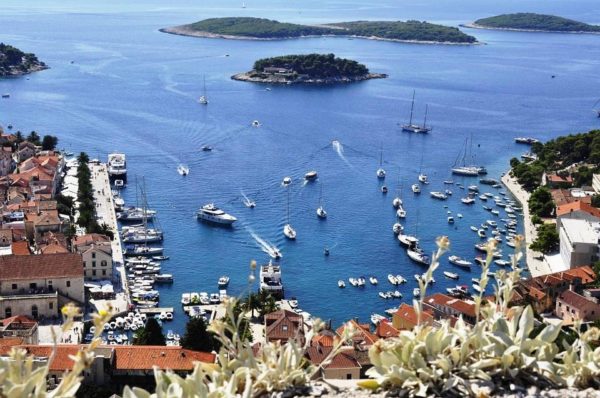 Brac provides an excellent window into authentic island life, particularly in the interior. It has been inhabited since Neolithic times and has an extensive and fascinating history.
Bol is a small village that hosts a big, beautiful beach: Zlatni Rat. It is perhaps the best known and the most beautiful beach in Croatia. 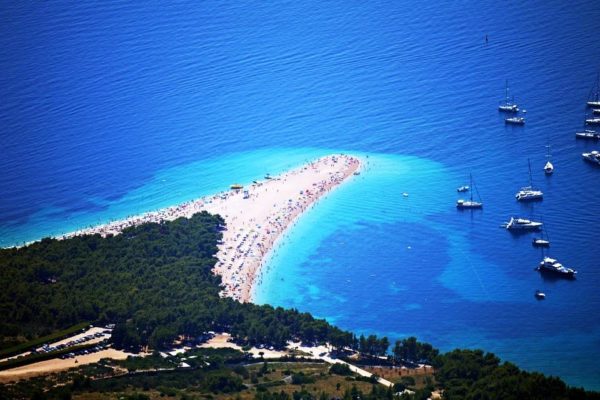 With the rugged dalmatian mountains as a backdrop and the blue Adriatic Sea lapping its shores, Split is emerging as one of the must-see cities of Europe.
Come for the scenery and fall in love with the people who know how beautiful their city is and are proud to show it off.
It’s a magnificent blend of antiquity and modernity, with the relics of its time as part of the Roman Empire celebrated as much as the al fresco wining and dining that tourists expect. 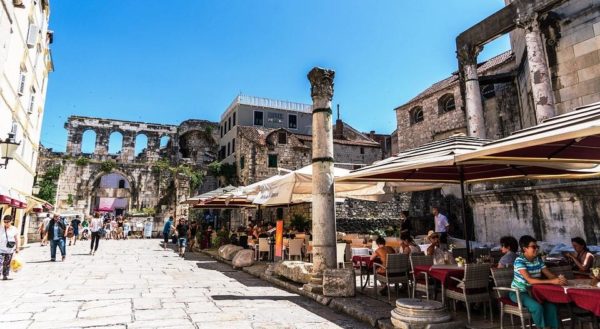 With cascading waterfalls hidden among lush forest greenery, it’s easy to see why Croatia’s very own Garden of Eden regularly features in lists of the world’s most beautiful places. At the heart of the Plitvice Lakes National Park, 16 azure pools spill into each other, connected with rocky outcrops dripping in moss. A boardwalk curves sinuously between lakes, allowing visitors to drink in the arresting beauty of the Plitvice Lakes at very close quarters.
The Plitvice Lakes area has been a site of continuous human settlement since prehistory, and today, locals still inhabit small settlements scattered around the park.
Given the long human history of the area, myths and legends have, over time, sprung from each of the 16 lakes. One of the most popular myths is the tale of an ancient, magic queen who was responsible for the creation of the lakes. 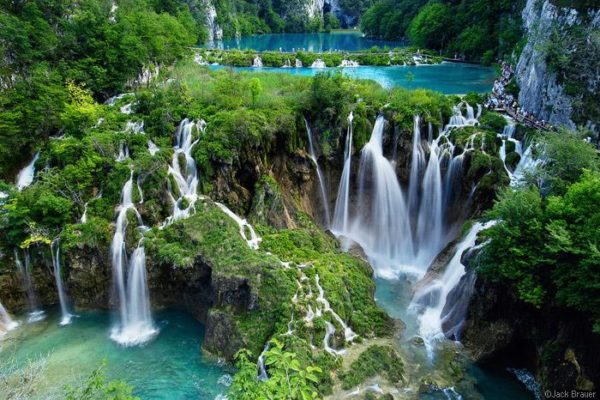 The brand new, Deluxe MS Arca Fiumana launched in 2017. With sleek lines, excellent manoeuvrability and the latest in safety features she is well suited to cruise Croatia’s picturesque coast and berth in the historic smaller ports. For your comfort the ship features 18 spacious cabins on two decks. All are fully air-conditioned and have twin or double beds, private en suites and contemporary facilities. Public spaces are plentiful and include an air-conditioned salon-restaurant, with fully equipped bar. This leads to a spacious outdoor lounge area with comfortable sofas. The large sun deck on top of the ship includes sun-beds and a shaded area from which to take in the views. At the rear of the ship a swimming platform allows easy access to the sea during many swim stops.

We use cookies to ensure that we give you the best experience on our website. If you continue to use this site we will assume that you are happy with it. OkCookie policy