Book your vacation in Italy

We are a group of 27 heading to Lake Como to spend our first 4 nights there followed by 4 nights in the lovely Italian Riviera. 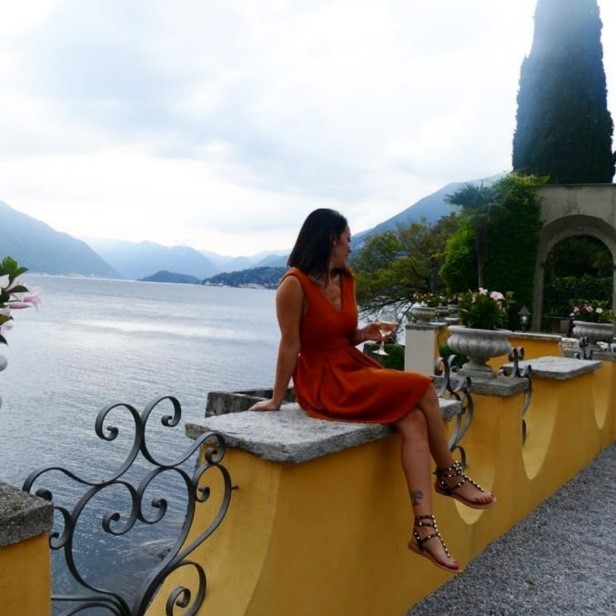 We fly into Milan and embark on a panoramic tour of Milan’s main landmarks stopping at sights such as the Sforza Castle, the former dwellings of the powerful Sforza family, a beautiful fortification with many museums within its walls. We then continue on to the famous Duomo Di Milano. The cathedral is a masterpiece in architectural design and detail which took thousands of workers, a new canal system and over six centuries to complete and its construction is still continuing with routine restorations. We admire the duomo from the outside as the lines to get in can be very long in excess of an hour. We also spend a little time in the square wandering around the Galleria Vittorio Emanuele II, a magnificent shopping arcade in Milan, built in 1860, covered with a glass and iron roof. The interior of the impressive five story structure is decorated with patriotic mosaics and statues and it is full of upscale stores and various restaurants and cafes.

We then drive a couple of hours to the village of Varenna, a quaint village on the eastern shore of Lake Como, looking over the central part of the lake towards Bellagio. Varenna’s picturesque lanes and old fishermen’s houses are unpretentiously appealing, and some visitors prefer the town to its grander neighbors. Although Varenna is a tourist destination, and its pretty waterfront and tiny stone beach fill up with vacationers, it has somehow a more authentic air than the other hotel-packed villages. The main tourist activities in Varenna are relaxing by the lake, and visiting the gardens of two villas, Villa Monastero and Villa Cipressi. I have chosen a lake front hotel called Royal Victoria Hotel, a 4-star property set in a building dating back to the 19th century. This property features lush gardens, a swimming pool and a wellness center with a sauna and a steam bath, 2 restaurants and a private dock. The views of Lake Como from anywhere within the hotel are breath-taking! 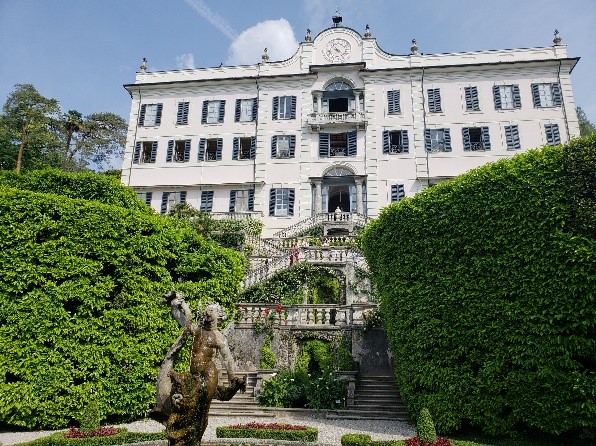 From this home base, we spend the next 4 days visiting the different villages around the lake. Our first visit is to the most important town on the lake, Como. As we sail across the lake in our own private boat, we admire the beautiful villas perched on the cliff sides of all the lake side villages. Once we dock in Como, we walk through its lively streets and nice waterfront and take the funicular up to Brunate, a picturesque village 700 meters above sea level. This excursion allows us to enjoy enchanting views over Lake Como and the Alps. The next day we visit the village of Bellagio but first we stop at Villa Carlotta, this beautiful villa was built at the end of 17th century by the Milanese marquis Giorgio Clerici in a natural basin between lake and mountains, facing the dolomite Grignas and the peninsula of Bellagio. It also houses the most spectacular botanical garden of the area with over 8 hectares of lush greenery with old varieties of camellias, century old cedars and sequoias, huge planes and tropical plants, the Rock garden and the Ferns valley, the Rhododendrons wood and the Bamboos garden among many other beautiful settings.

On our last day in Lake Como, we drive over to Lake Maggiore, the second largest lake in Italy in size (the biggest is Lake Garda) but the largest of the lakes closest to the Alps. Since the 19th century, the lake has been one of the top vacation and weekend destinations for wealthy families from big cities, who built some of northern Italy’s most stunning villas on its shores. Anyone who has seen a postcard of Lake Maggiore is bound to be familiar with The Borromean Islands outline. The archipelago is one of the biggest attractions for travelers enticed by the charm of yesteryear—and Isola Bella, Isola Madre and Isola dei Pescatori have plenty of charm. The archipelago is named after the Borromeo family, which acquired the islands in the 14th century and still owns two of them. The noble palaces on the islands, with their rooms filled with antique furniture, paintings and priceless porcelain, and the enchanting gardens are open to visitors and are a must on your list of things to see. 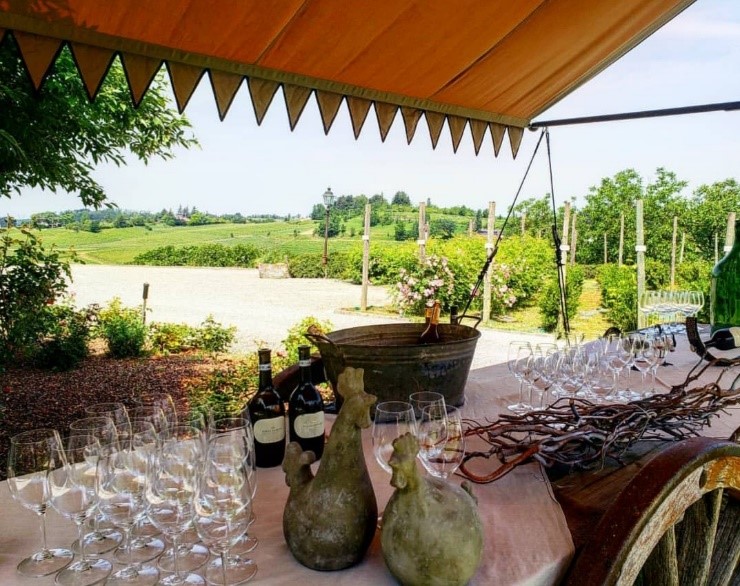 On our 5th day, we depart Varenna and make our long way over to Santa Margherita Ligure, a picture-perfect seaside resort town with a busy promenade, where elegant hotels with Liberty facades overlook yachts in this fishing-village-turned-retirement-spot. Santa Margherita is a good base for daytrips to Portofino, the picturesque San Fruttuoso monastery, the resorts of Camogli and Rapallo, Genoa and the Cinque Terre (around an hour by train, or an all-day boat excursion).

We break up the long journey mid-way at Villa Sparina Wine Estate, located in the Gavi wine region. The history of Villa Sparina goes back to the 1700s when it was part of a grand colonial complex immersed in the vineyards of Monterotondo in Piedmont, the heart of Gavi territory. In Villa Sparina, visitors can enjoy fine dining at La Gallina Restaurant where the cuisine balances creativity and southern Piedmontese culinary traditions. Villa Sparina also houses the four-star L’Ostelliere hotel, where guests can have a unique and unforgettable stay in Piedmont. After a delicious banquet of cured meats, cheeses, vegetables and cheese risotto paired with 4 different wines, we embark on our final stretch to the riviera.

We arrive at Grand Hotel Miramare, our hotel for the next 4 nights; this hotel is the epitome of classic Italian elegance. Situated in the heart of the Italian Riviera, the art nouveau-style building overlooks the beautiful Golfo del Tigullio. Palms, camellias and lavender are among the aromatic plants growing in the hotel’s large Mediterranean garden. The spa and choice of restaurants and bars add to the sense of luxury. Built in 1903, Grand Hotel Miramare was one of the first luxury hotels on the Italian Riviera. You feel like you are following in the footsteps of Sir Laurence Olivier and Vivien Leigh, who spent their honeymoon here in the 1940s! 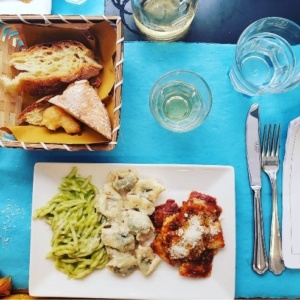 The next day, our first day excursion is to Genoa, the birthplace of Christopher Columbus and the pesto sauce! Known as “the proud one” due to its glorious past and impressive landmarks, Genoa is the capital city of the Liguria region. Part of the old town is inscribed on the Unesco World Heritage List. After a two-hour long city tour among its labyrinth of narrow, medieval alleyways, we have built enough appetite to make our way to Il Genovese, a 1912 establishment featuring genuine Genovese dishes such as of course, the pesto. With lots of wine and pasta to last for days, we head back to Santa Margherita.

On our 7th day, the crew heads over to Cinque Terre by bus first to La Spezia, where we embark in a ferry that takes us to our first stop Portoverene. Perched on the dreamy Golfo dei Poeti’s western promontory, this historic fishing port’s sinuous seven- and eight-story harbor front houses form an almost impregnable citadel around the muscular Castello Doria. Later we continue our boat trip and reach Monterosso which has the best beaches of the Cinque Terre villages and the most wine shops, artisan shops, hotels and restaurants. In Monterosso we visit the Enoteca Internazionale wine shop and taste 2 different Cinque Terre Doc white wines and a glass of sciacchetra’ (local sweet wine with very limited production) in addition to a mixture of cured meats and cheeses. It takes about an hour to return back to Grand Miramare hotel early afternoon.

Our last day in the riviera couldn’t be more marvelous. We board our private boat towards Portofino, a charming Italian fishing village and vacation resort famous for its picturesque harbor and historical association with celebrity and artistic visitors. The “Piazzetta,” meeting-up point for the international jet-set, is the symbol of Portofino, while the port, with its characteristic, brightly-colored houses, is the icon of this borgo’s maritime traditions, whose inhabitants were called “delfini” (dolphins) by the Greeks and Romans. Next, we stop in San Fruttuoso, one of the most unique and special places in all of Liguria with two powerful attractions: the ancient One Benedictine monastery and the Christ of the Abyss statue. Our boat tour finishes in Camogli, a cozy medieval fishing village with an old port and a very distinctive character. Here we find authentic fishermen and old boats, boutique shops and restaurants. We all break into smaller groups and head to different restaurants to taste the local cuisine. I decide to try the famous and only offered locally, cheese focaccia, paired with some delicious local wine.

Our trip comes to a closure by having a spectacular farewell dinner at the Grand Hotel Miramare where the chef has prepared the most sumptuous and succulent 5 course meal for us paired with several white, red and sparkling wine. As we all cheer and reminisce about the last week, everyone is already asking: Where are you taking us next?

We use cookies to ensure that we give you the best experience on our website. If you continue to use this site we will assume that you are happy with it. OkCookie policy